We are at the end of the 50s. Alongside the farming and tourism development, the shooting of cinema movies keeps going. Figures of the artistic world invited by Paul Ricard, his spouse and children, discover Méjanes. Luis Mariano, the Spanish tenor known for his biggest hit, Mexico, falls in love with the Domaine de Méjanes, the Ricard family, and the Camargue. He dreams of a little house in front of the Vaccarès Pond. In 1957 it is Fernand Raynaud that comes for the shooting of Les arènes joyeuses. Without much horse stunt experience, he has to shoot a scene where he gallops full speed with his back giving towards the front. Not so easy. Jacques Cognet will perform the horse stunts for him. Tino Rossi and Fernandel are also very fond of Méjanes. They were moved and happy to discover the history of that place, Paul Ricard told them about it while guiding them through the Domain. We are in 1965 at the Méjanes restaurant. Lunch takes place in the presence of the remarkable photographer Lucien Clergue and his friend Pablo Picasso, the bullfighter Cesar Giron, Luis Mariano, and the great Manitas de Plata. An intense moment of thoughtfulness and passion in the friendliest environment. A timeless moment on this little piece of land. That’s the Méjanes’s spirit. 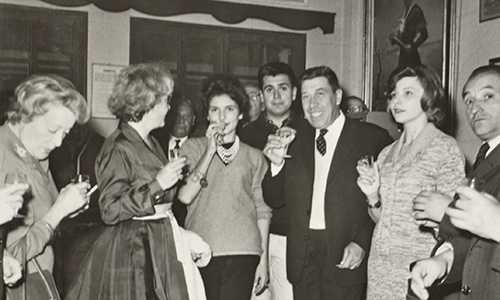 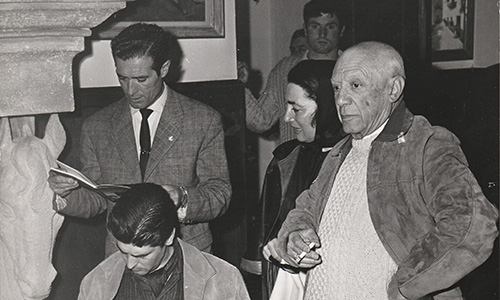 We are in 1963. The epic story of Méjanes keeps going. It is the legendary French rock artist, Johnny Hallyday, that is going to discover Méjanes. The literary man from Arles, Yvan Audouard, opens the doors of our beautiful Camargue to the “Idol of the youth”. He shoots his first big movie, D’où viens-tu Johnny? The singer will actually celebrate his 20th birthday there, with at his side the beautiful Sylvie Vartan. Fernand Sardou, who was also part of the cast, received his son Michel on the movie set. The story says that this is during that time in our Camargue that Michel Sardou discovered his vocation for singing. At the Domaine de Méjanes, the farming warehouses are turned into cinema studios. The biggest one is located near the walking path. All the indoor scenes and horse galloping ones are shot in Méjanes. The others are organised between the Mas Calabrun, the arenas in Saintes-Maries-de-la-Mer, and Cacharel. D’où viens-tu Johnny ? is a French Western movie located in the Camargue converted into Far West with gardians acting as cowboys and gypsies as Mexicans. André Soler and Francis San Juan, the best raseteurs at the time, were roped into participating in the movie. Songs such as Pour moi la vie va commencer written by Jean-Jacques Debout, also present on the set, are introduced in the scenario. During the movie release in December 1963, Yvan Audouar declares that “Johnny’s abilities to very well adapt to the Camargue environment and create a beautiful friendship with the people of the region was a great victory”. Only a few pictures and nice words in the guest book are left from Johnny Hallyday’s stay at the Domaine de Méjanes.

In 1966, it is François Mitterrand that comes for the first time to the Domain. He is at the time the Président of Nièvre’s Conseil Général. He comes one year before losing the Presidential Election as a Left Union candidate in the second round against the General de Gaulle. At the beginning of the 70s, Michèle Ricard will very briefly cross his path in Méjanes. One scorching summer afternoon, Michèle Ricard is in the Domain’s yard when a big, dark car with a license plate from Lyon arrives. Two men come out of it, one of them dressed in knee-length shorts and with an intense look in his eyes. He stares at Michèle Ricard deeply. His companion asks if it is possible to find petrol in Méjanes, pointing at the pump installed in the yard. Michele Ricard replies that there is no way to use it, as petrol is reserved for the farming equipment. The two companions leave. While walking back to the house, Michèle Ricard realise that the handsome brown-haired man was François Mitterrand ! Paul Ricard laughed a lot when she told him the story. 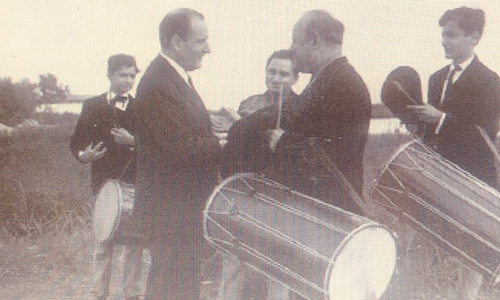 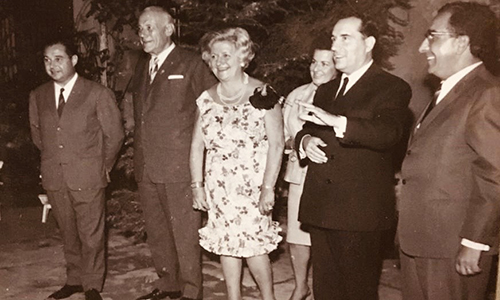 Mostly for official visits but also to discover the symbolic place the Camargue is and immerse themselves in its traditions. Ms. Ricard used to organise beautiful festive and friendly events at the Méjanes restaurant for these special days, with all the staff, gardians and their horses present for the occasion. Bernard, the highest-ranked gardian, even used to come in the restaurant riding his horse to welcome the guests. Young cows were also left free in the main room, amongst the crowd. However, the habit was quickly dropped as it caused too much damage, mostly crockery. There were always great moments accompanied by the sound of guitars and applause. Incredible and joyful memories cherished by all. In May 1964, Pierre Lelong, public prosecutor at the President’s Office, discovers Méjanes and takes a lot of interest in the domain. The history of the Land fascinates him, just like every other guest entering this universe.