The Domaine de Méjanes : Ambassador to the Camargue in the world

Freedom ! Beyond the immense happiness of finally being free, it will take time for the economy to restart. The prohibition of producing, selling, and drinking alcohol above 16% isn’t lifted and won’t be for a long time.

Farming must then become a profitable activity, not only to feed the people in Méjanes but to allow all of the workers to make a living. One of the solutions is to develop the production and sales of the Camargue rice. This is when, for the second time, the Domaine de Méjanes comes into the spotlight. With the support of his good friend, Philippe Lamour, and the manade’s owner, Paul Ricard succeed in chasing away the fear that the people from the Camargue had developed. He reassured them that their lands destined to breed horses and bulls wouldn’t disappear for the profit of agriculture.

With the appropriate farming equipment being delivered in Méjanes, the important constructing work can finally start again. Although producing rice and making it profitable was possible, finding the buyers would not be as simple.

Eating this type of food was yet to become a habit for French people. It was necessary to find a way to make them interested in including it in their daily cooking. This challenge was a new exciting adventure. Politicians, ‘influencers’, journalists, and professors are invited to the Domaine de Méjanes to taste the Camargue rice. This is how the rice ends up in the plate of the Transatlantique passengers, how it is used in starred restaurants, and many published recipes as a premium ingredient. It also is presented at the Sorbonne by the outstanding Pomiane Professor. At this time, Paul Ricard goes to the United-States and finds out about their farming techniques and how their economy works. With a lot of excitement, he visits Henri Ford’s factory, which he admires a lot. Paul Ricard will often mention one of the entrepreneur’s saying: “Take away my factories but leave me my workers and I will start again”. He will come back to France more driven than ever and with new challenges in mind for his business, and with Méjanes holding the leading role.

“In 1950, I restarted from the bottom without anyone noticing”.

Paul Ricard’s life was like a movie. But in reality, this is how it went.

Marcel Pagnol is one of Paul Ricard and his family’s closest friends. An essential and long written correspondence proves of their close friendship. During each of his adventures in Italy, Corsica, and many other places, Paul looks for his Sergeant-Major nib to address his letters to the writer that only uses this specific nib to write his artwork. Years later, Michèle Ricard, who is now a Paris student, will have lunch every Sunday at Marcel Pagnol’s house. And every Sunday, she will hear, “Sit down sweety, I am going to tell you a story”. With his cat laid down on a book pile sitting on top of the desk, she listens to this marvelous speaker for hours, completely fascinated.

Back at the beginning of the 50s, Marcel Pagnol sells his cinema studios in Marseille. This opportunity is the perfect one for Paul Ricard to invest in his lifelong dream intensified by his trip to the United-States. He becomes the first film producer in France to use Gevacolor, a color motion picture process. Méjanes enters the movie industry for the first time by holding the making of the film La Caraque Blonde. The movie is the first to be shot in the Camargue region and is made by Jacqueline Audry, at the time one of the few female directors. The shooting happens during a very cold winter and takes months. Many gardians coming from the region participate in the movie as well as all Méjanes’s staff. The heroine, Tilda Thamar, is an Argentinian actress with unprecedented beauty and sensuality. The movie tells the story of two rival families in the Camargue. The first are manadiers, and the second, rice farmers. An engineer comes to town with a gipsy, the blond Caraque. At the end of the movie, everyone makes up and gets married. A message from Paul Ricard to the manadiers, worried by the progress of the rice farmers. A message of hope that everyone can live together and even help each other out. A second movie is shot in Méjanes. La Loi de la Poudre. A Western movie with women carrying guns. Paul Ricard is also a feminist. More movies will be shot in Méjanes with famous French actors. We will get to it later.

This morning, Michèle Morgan, horse rides along the Vaccarès pond with my big sitter Betty. Betty, the actress with legendary blue eyes, will leave an emotional note and take off from the domain. Christian Plume had organised for her to visit during the making of a television documentary. He was a talented writer, journalist, radio host, and screenwriter. A descendant of seven generations of horse and bull breeders. A brilliant representative of Méjanes and the Camargue. 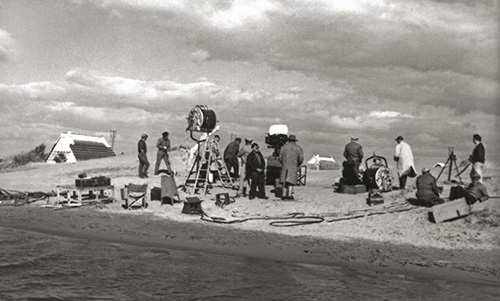 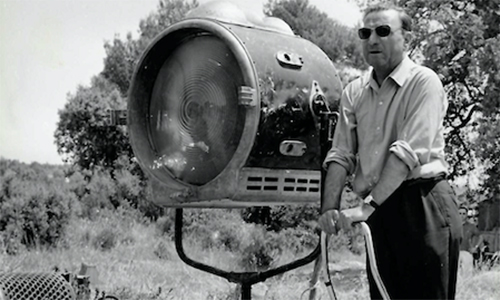 Paul Ricard brings the Camargue to the Vatican

We are in 1961, and Michèle Ricard is 13 years old that year. She is about to live one of the best adventures of her life. At the end of the 40s, Paul Ricard had established a friendly bond with the Bishop Roncalli. They had met in Saintes-Maries-de-la-Mer when the Apostolic Nuncio presided over the gipsy’s pilgrimage. A few years later, when the Bishop was elected as the Pope and became Jean XXIII, Paul Ricard sent his congratulations via telegram. In 1961, Pope Jean XXIII grants him an audience, and Paul Ricard organises a trip with all his business’ staff but not only! Amongst Paul Ricard’s 1200 guests were gardians, manadiers, Henriette Bon Queen of Arles, and her demoiselle d’honneur (ladies of honor). A Lamb and 10 Camargue Horses will also be brought on the trip. Three trains departing from Paris and Marseille are used for that purpose. Early morning on the audience’s day, Michèle Ricard joins the Queen of Arles and her ladies of honor in their hotel bedroom. For the first time, she wears the Camargue traditional outfit. How joyful it was to represent their beloved land. To be the representatives of the Camargue in Rome and the Vatican! Picture a procession with Tambourinaires, the tambourine and galoubet players dressed in their traditional red and white outfit. The gardians riding their white horses and holding with pride their trident. Behind them, The Queen of Arles and her ladies of honor. Her childhood friend, Christian Laurenti, escort Michèle Ricard. They ride together on one of the white horses with her sitting aside. When they reach Saint-Pierre square, Michèle Ricard feels like on a movie set. The emotions completely overwhelm her. The Pope receives them. Paul Ricard gives a beautiful ambulance as a gift to the Vatican with the Paschal Lamb. Another quite personal gift seems to move the Pope. An album with pictures of his visit to Saintes-Maries-de-la-Mer in 1949. Michèle Ricard catches a glimpse of the red shoes under his cassock. She is amused to see for herself the mythical Pope’s red slippers. They are invited to the Capitol, the Palazzo Farnese, the Villa Bonaparte, and organise des jeux Provençaux (Provence games) during their stay.

It was a timeless stay and an incredible moment of sharing for the people of Méjanes and the people of Camargue, reunited in the Eternal City.

To end their trip to Rome, Paul Ricard organises a ball. One thousand five hundred guests are invited to the big dining room of the Palazzo dei Congressi in Roma. Paul Ricard’s speech is powerful and moving. He expresses his deepest conviction in his conclusion, “Mankind is what’s important. Not the capital”. 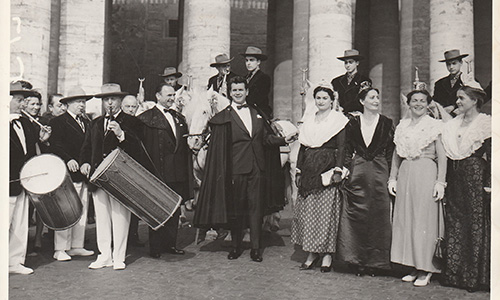 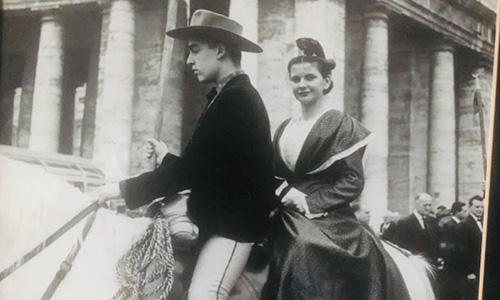